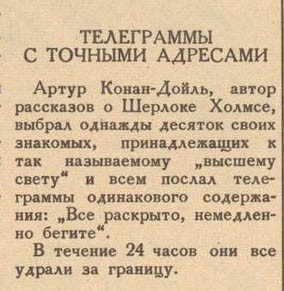 "There's an old joke that has been making the rounds for hundreds of years. It has been ascribed to heads of state, heads of the church, Edgar Allan Poe and Sir Arthur Conan Doyle. It would make an unconscionable experiment. And I want it to happen. Do you dare discover it?
Sir Arthur Conan Doyle was supposedly the orchestrator of a cruel joke. One night, bored and idly toying with wicked thoughts, he decided to send a note to five of his friends. The note would be delivered anonymously. It would have no signature, and would contain no information. It would only say, "We are discovered. Flee!" At his next dinner party, his social circle was abuzz with the sudden, and total, disappearance of one of the people who had received the note. The person was never heard from again...."(с)
https://gizmodo.com/this-mystery-writers-prank-would-make...
Tags: интересно, просто так
Subscribe