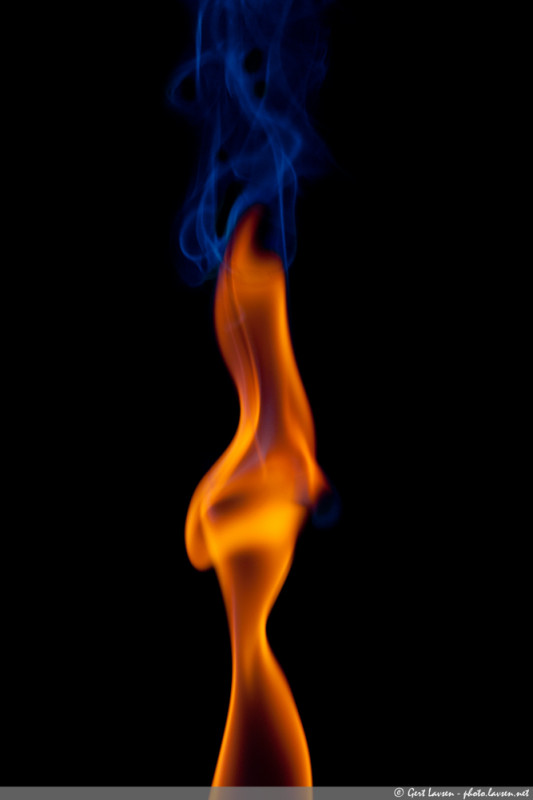 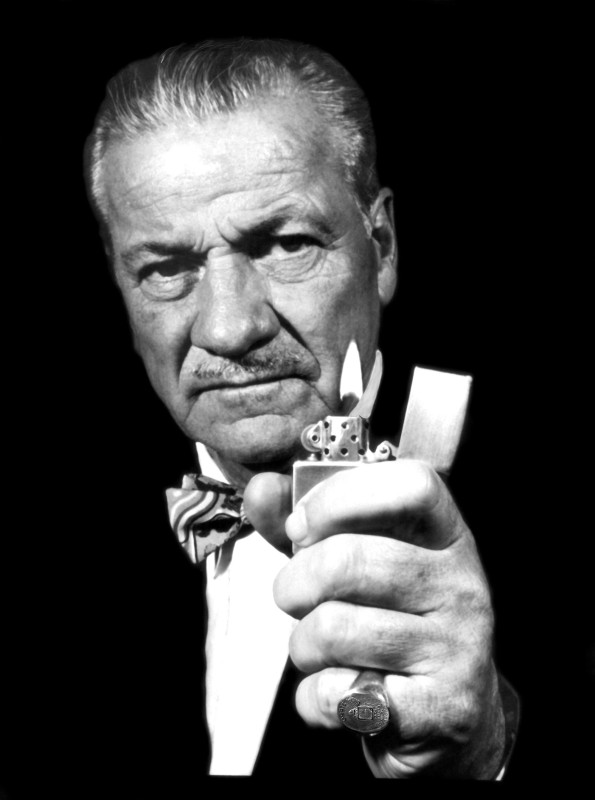 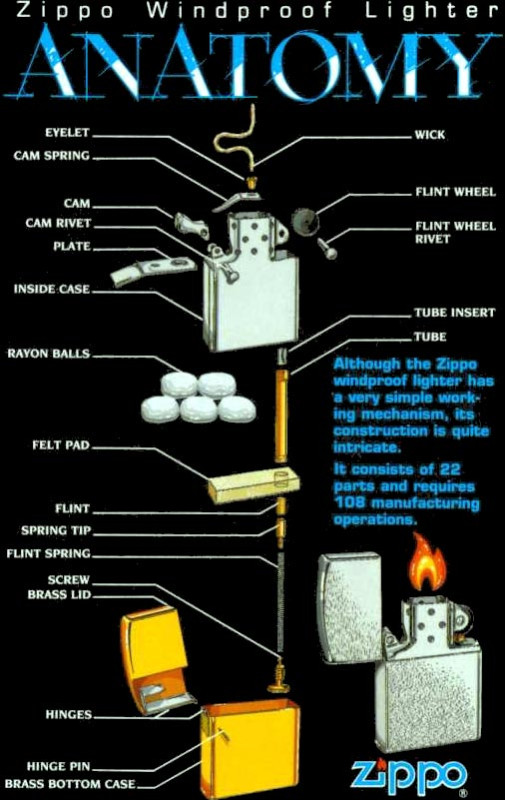 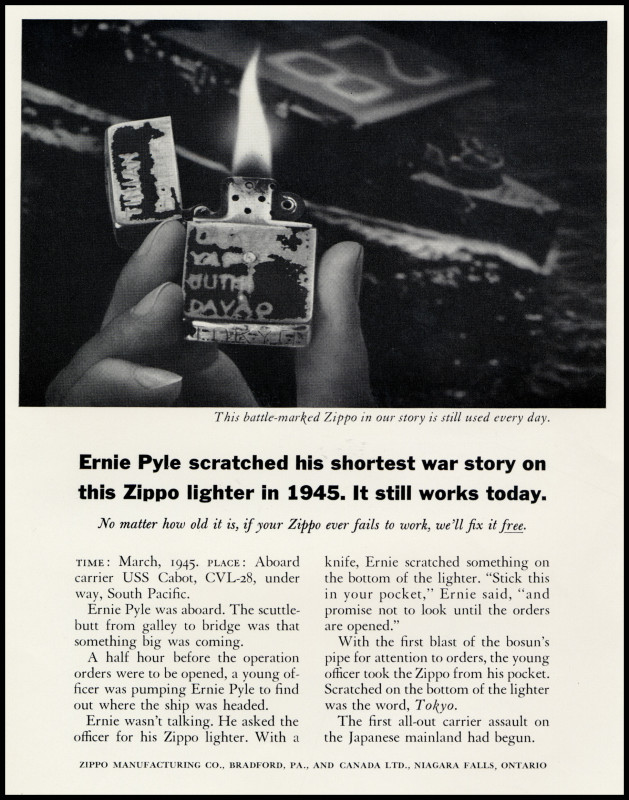 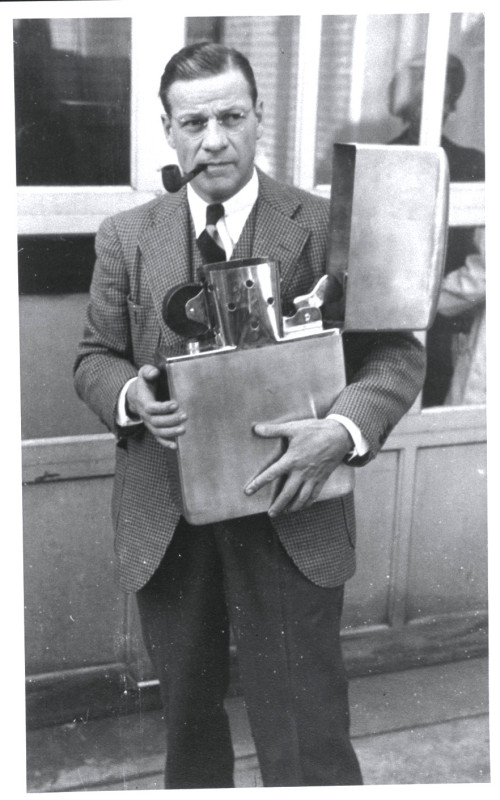 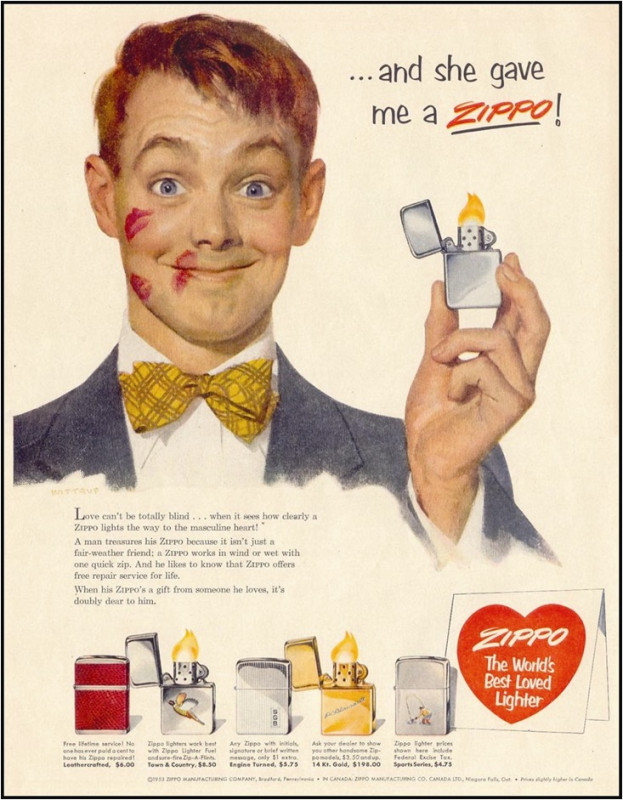 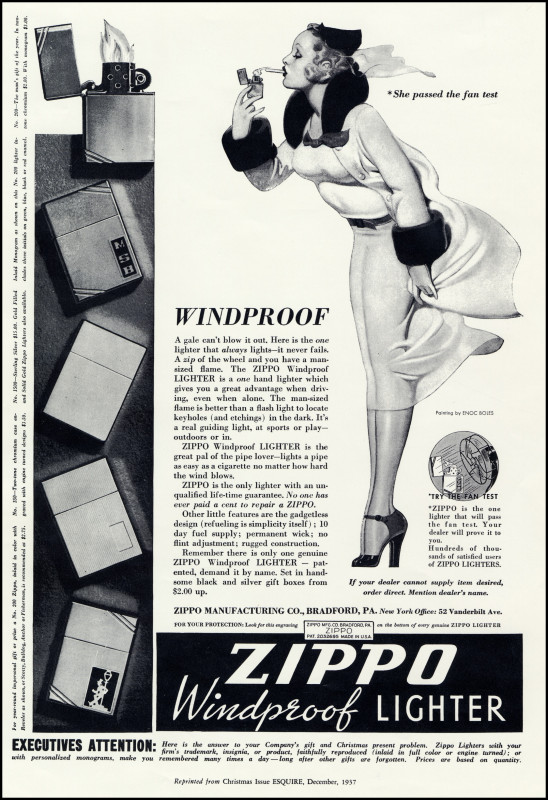 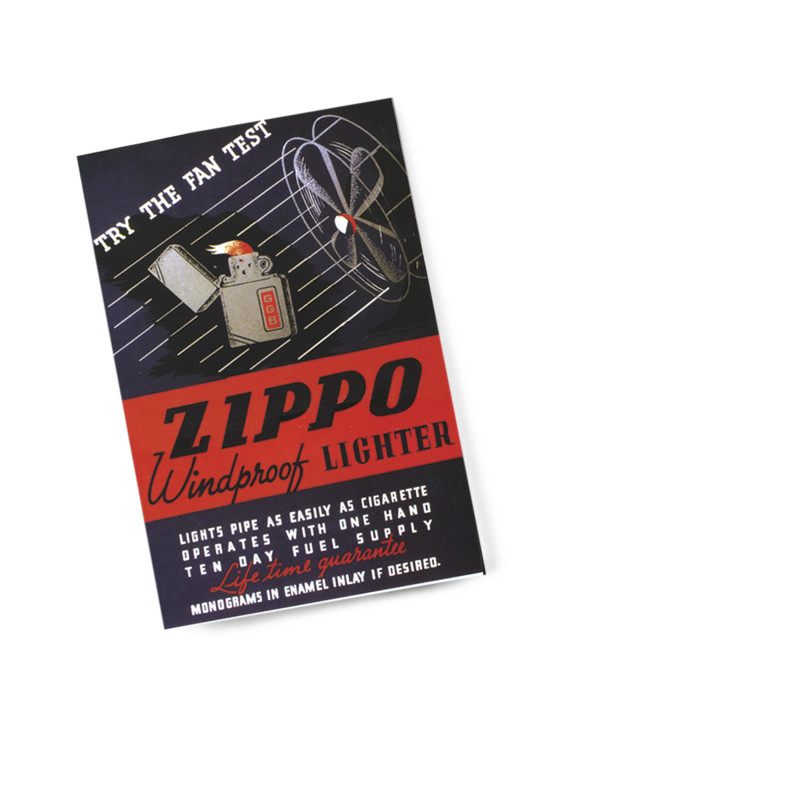 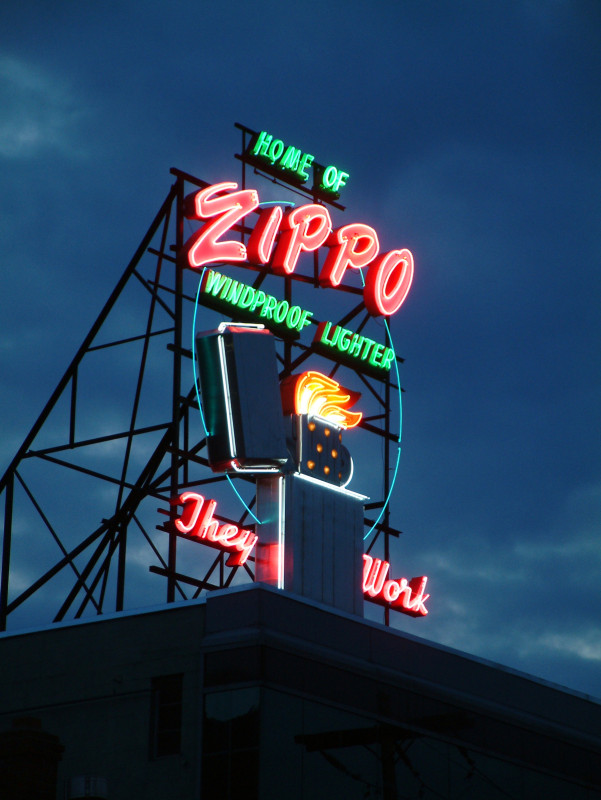 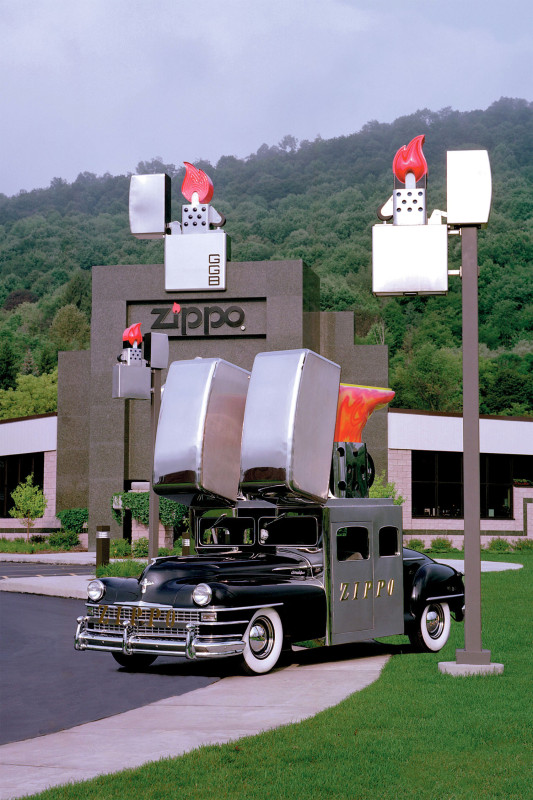 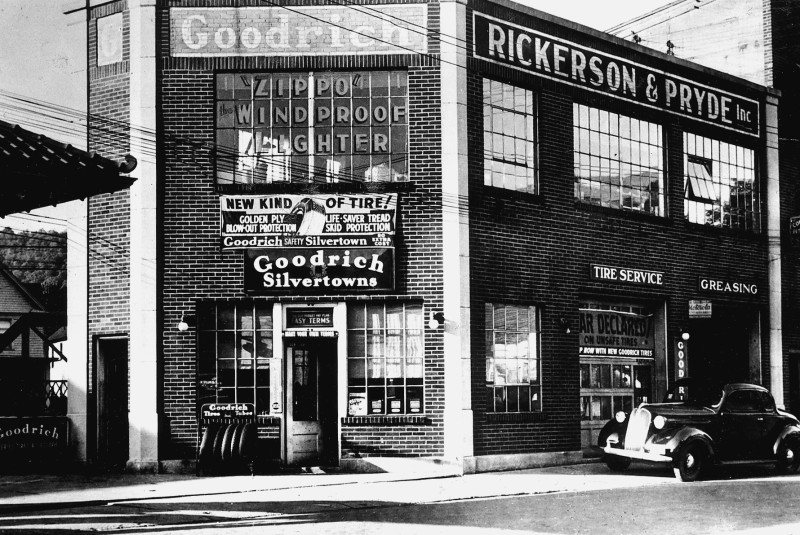 Zippo facts and factoids
Total windproof lighter production since 1932: over 500 million.
Annual production: 10-12 million windproof lighters per year.
Every Zippo windproof lighter is made in U.S.A. – Bradford, PA
The first lighter was made by Zippo founder in the fall-winter of 1932-33. The first models sold in 1933 for $ 1.95.
The basic design of the Zippo lighter has been virtually the same since 1932, the shape of the lighter is a registered trademark
The name “Zippo” was coined by founder George Blaisdell – he liked the sound of the word “zipper”
First national ad ran in Esquire in 1936. It was a flop – and resulted in no traceable sales, primarily due to poor distribution nationally.
World War II put Zippo on the map
The company was struggling throughout the 1930s, but during the war all the production was sold to the military. This put the company on a firm foundation
American G.I.s took the lighters to the fronts in Europe and Asia and laid the groundwork for international distribution we have today. Unwittingly, they became the first Zippo international marketers
In numerous letters and newspaper columns famous WWII war correspondent Ernie Pyle said, “the Zippo lighter is the most coveted thing on the battlefield”
Zippo lighters have saved lives. There are several incidents about the lighters stopping bullets during WWII and subsequent wars. The lighters also have been used as signaling devices which have saved the lives of people in trouble.
Number of countries where Zippo lighters are sold, 160
Largest market overseas, China
Fastest growing, China and India
Recognized by almost as many people around the world as Coke and McDonald’s – 94% brand awareness, yet Zippo has less than 1,000 employees
Every Zippo lighter is backed by a lifetime guarantee
Number of lighter repairs since 1932, approx 8 million or 1.68% of production
US Repair Clinic, annual 72,000  (established 1932)
Japan Repair Clinic, annual 20,000 (established 1994)
European Repair Clinic, annual 54,000 (established 2007)
Zippo has four major brands:
Zippo lighters
Zippo outdoor products
Case knives
Ronson lighters
Zippo’s diverse product line includes pocket lighters and accessories; butane candle lighters; a robust line of heat and flame products for outdoor enthusiasts.
Zippo also owns the Ronson brand of lighters and fuel and W.R. Case and Sons Cutlery Company, both based in Bradford, PA.
Zippo has 1 739 098  Facebook fans globally. The U.S, Mexico, and Turkey represent the top three countries
Zippo has expanded extensively in the outdoor/camping market and currently has over 40 products in the line
In 2014, Zippo opened its first three US retail stores - all in Las Vegas. The first opened in June at the Luxor Hotel and Casino (these are in addition to 14 China stores that have opened in the past three years)
Time Magazine named the Zippo lighter one of the most influential gadgets since 1923
Zippo lighters have appeared in over 2,000 Hollywood films, and in many cases the use of the lighter changed the plot of the film
On TV, Zippo has been the answer to Jeopardy questions in four different episodes
As a source of flame, Zippo is a favorite of Broadway productions because of its dependability in performing for live theater
Zippo has been connected to music since the 1970s when fans started holding up their lighters at rock concerts. Today the company sponsors Zippo Encore event series in 8 countries around the world
In 1958 a date code denotation was added to the bottom of every windproof lighter. This has extremely valuable to lighter collectors
There are 14 lighter-collecting clubs around the world.

Frank Sinatra was buried with a Zippo lighter, a bottle of Jack Daniels and a dime
Zippo’s top licensed products are Harley-Davidson, NFL, and Jack Daniels

Zippo has produced over 500,000,000 windproof lighters since 1932. If these lighters were laid end-to-end they would stretch over halfway around the world or from New York City to Los Angeles more than 4 times.
If all of the 500,000,000 Zippo lighters were laid side by side, they would pave the streets of Zippo's hometown, Bradford, PA, more than 2 times over
500,000,000 Zippo lighters would cover 125 football fields
Zippo licenses a line of high-quality fragrances some of them are Zippo Original, On the Road, In the Blue, Dresscode, FeelZone, BreakZone and Zippo – The Woman.
Thousands of corporate logos have been imprinted on Zippo lighters - some lighters have been produced to look like products including a TV, a refrigerator and a vending machine
The Zippo/Case Museum opened in 1997; it is the most visited museum in Northern Pennsylvania
Zippo employees are extremely proud of their products and longevity is a hallmark of the Zippo workforce. Currently there are 53 employees that have worked here for 30-something years and 33 that have worked for more than 40 years. The longest tenure for a current employee is 49 years