Сегодня поговорим о Мастере, с огромным опытом, другом Боба Лавлесса и А.Г. Рассела - это Steve Johnson.
As you know Francesco Pachi and me introduce our new project about Great Persons in the World of Knives.
The name of Francesco Pachi is well known for knife masters and not only for them.
A talented man is talented in any craft, so Francesco is known not only with his knife masterpieces highly appreciated by collectors: for a long time he was the head of, probably, one of the most famous knife Guilds in the world, the Italian Knife Guild.
Besides, he makes amazing photographs appreciated by collectors not less than his knives.
Currently he his occupied with photography only. But still the knife world, be these real knives, photographs, exhibitions, books, or anything else, here are his world and his life. 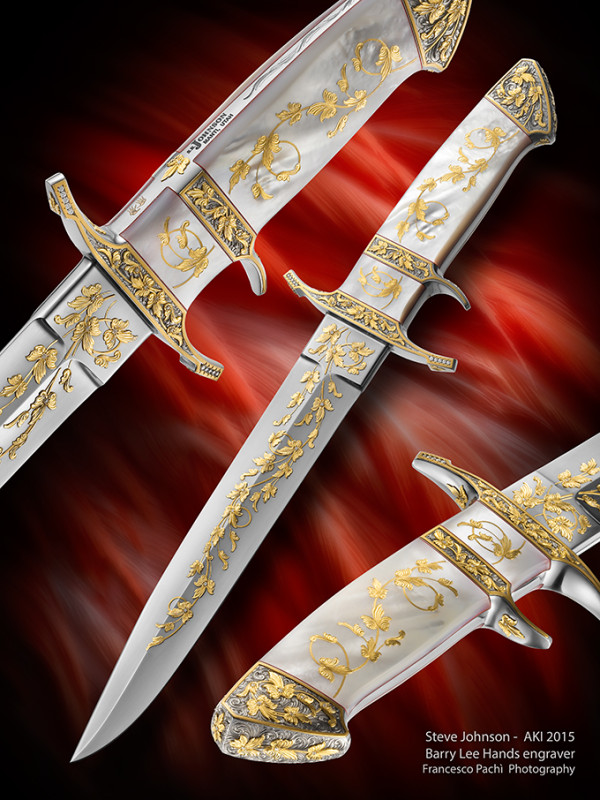 Full-Integral Loveless-Style Big Bear
The knife is made from CPM 154-CM steel and mother of pearl handles with hidden pins has an overall length of 14 inches. Decorated with 24k gold inlays and overlays, set with diamonds and gilded pearl by Barry Lee Hands, this is the first Big Bear ever engraved by Barry.
Работа была представлена на AKI 2015.
Опыт Стива по-истине большой: в ножевой нише он с начала 1966 года. И за это время буквально "отполировал" своё мастерство до гениально качественного и точного "финиша" :)
https://www.srjknives.com :
I completed my first knife, which I still have, in March of 1966.
I was lucky enough to have Gil Hibben as my Boy Scout Explorer Advisor and he gave each scout the opportunity to make a knife. For me, the "project" evolved into part-time and then full-time work. Later, I had the opportunity to work with Harvey Draper, Rod Chappel, Buster Warenski and, thanks to the kind recommendation of long-time friend/advisor Mr. A.G. Russell, Bob Loveless.
I will be forever grateful for the effect these men have had on my life, and my work. Bob's great influence is obvious in many of the photos shown here.
Over the years I have earned a college degree, met and married Dorothy (Oh, happy day) and we're working on raising a family. Knifemaking has remained a constant in my life, since I was a teenager in the Hibben shop. Thirty-some years later, I continue to make using knives that feature well-defined grind lines, precise fit and highly polished blades of, for the most part, 154-CM/ATS-34 type steel. I enjoy the people and places associated with knifemaking and the personal challenge of making each knife as flawless as I can make it.
Интеграл, который вы видете на фото и который был представлен на AKI 2015 так же знаменит благодаря другому человеку, который "приложил руку" к появлению именно этого ножа - это  Barry Lee Hands.

http://barryleehands.com :
Barry Lee Hands, The Engraver, creates masterworks of the engraving arts and searches out inspiration around the globe. He has pursued his studies of art history and engraving techniques in Africa, Asia, Europe, North America, Central America, and South America. He is recognized as one of the best engravers in the world.