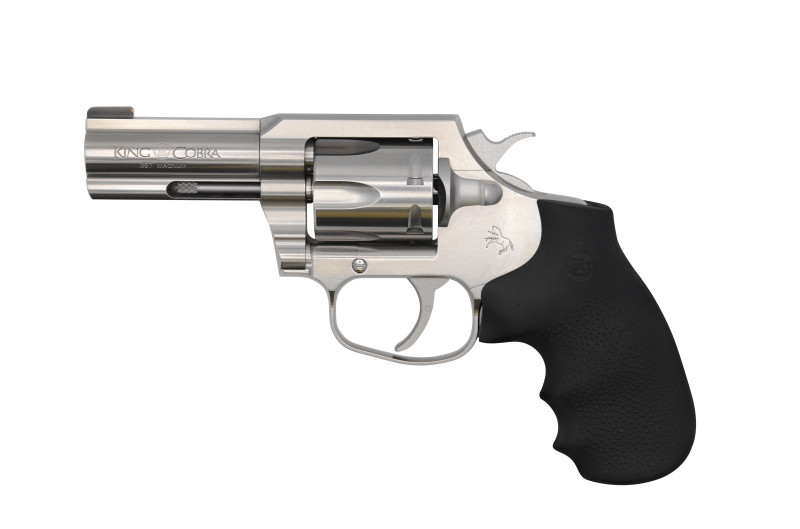 WEST HARTFORD, CONN., (1/8/2019) – Following Colt’s successful re-entry into the Double-Action Revolver market in 2017, Colt introduces the all-new King Cobra in .357 Magnum. The King Cobra will be available in January 2019 through Colt stocking dealers.
The all-new King Cobra features American Stainless Steel construction, a heavy duty frame with a full- lug 3 in. barrel, and the 6-round capacity that differentiates Colt small frame revolvers from the competition. The King Cobra also features the same user-replaceable front sight and Linear Leaf spring trigger (LL2TM) as the rest of the Cobra family. MSRP for the all-new King Cobra is $899.
“Our customers started asking for a .357 version of our Cobra immediately after the release, and at that moment we knew we had to prioritize this great addition to the Cobra family” said Justin Baldini, Product Director at Colt. “We couldn’t be more excited to add the power of .357 Magnum back into Colt’s Double Action Revolver lineup.”
The all-new King Cobra premieres at the National Shooting Sports Foundation’s (NSSF) Shot Show in Las Vegas, January 21-25, 2019. Industry Media professionals will get to experience the King Cobra for the first time at the “Industry Day at the Range” event which kicks off Shot Show. Customers will have their first opportunity to see the King Cobra at the NRA Great American Outdoor Show in Harrisburg, Penn., February 2-10, 2019.
About Colt’s Manufacturing Company LLC
Colt’s Manufacturing Company LLC is one of the world’s leading designers, developers and manufacturers of firearms. The company has supplied civilian, military and law enforcement customers in the United States and throughout the world for more than 175 years. Its subsidiary, Colt Canada Corporation, is the Canadian government’s Center of Excellence for small arms and is the Canadian military’s sole supplier of the C7 rifle and C8 carbine.