One of the most anticipated Spyderco knives of 2018, the Kapara is our first collaboration with Australian custom knifemaker Alistair Phillips. The design is based on Phillips’ popular Redback folder and, like the term “redback,” draws its name from the redback spider (Latrodectus hasseltii), a species of highly venomous spider found throughout Australia, New Zealand, and Southeast Asia. The adult female redback has a spherical black body with a prominent red stripe on the upper side of her abdomen. Inspired by this distinctive feature, Phillips’ handmade Redback folders showcase a contrasting red backspacer in the handle.
A self-described “spare-time knifemaker,” Phillips specializes in meticulously crafted slipjoint and lock-blade folding knives. After licensing Spyderco’s Trademark Round Hole™ for use in his custom blades, he posted several photos of his work on our Internet forum. Spyderco founder Sal Glesser was impressed with what he saw and purchased one of Phillips’ Redbacks for his personal collection. When he received it, he was even more impressed and ultimately suggested a collaboration project. Phillips eagerly agreed.
According to Phillips, he originally designed the Redback/Kapara as a personal carry knife that he could use for food preparation in an office environment. After gaining a bit of weight, he was committed to eating healthier and trimming down, so he decided to create a cutting tool that would help him achieve that goal. He began by measuring a variety of fruits and vegetables to determine an appropriate blade length. He then tried using several of his existing designs, which happened to be flipper openers, to prepare food on a cutting board. Realizing that the flipper tab got in the way of using the entire length of the edge, he envisioned a knife with a long cutting edge, a Spyderco Round Hole™ for easy opening, and a Compression Lock™ to keep food from getting into the lock mechanism. Ultimately, he not only created a great folding knife design, but managed to lose a significant amount of weight by putting it to use! 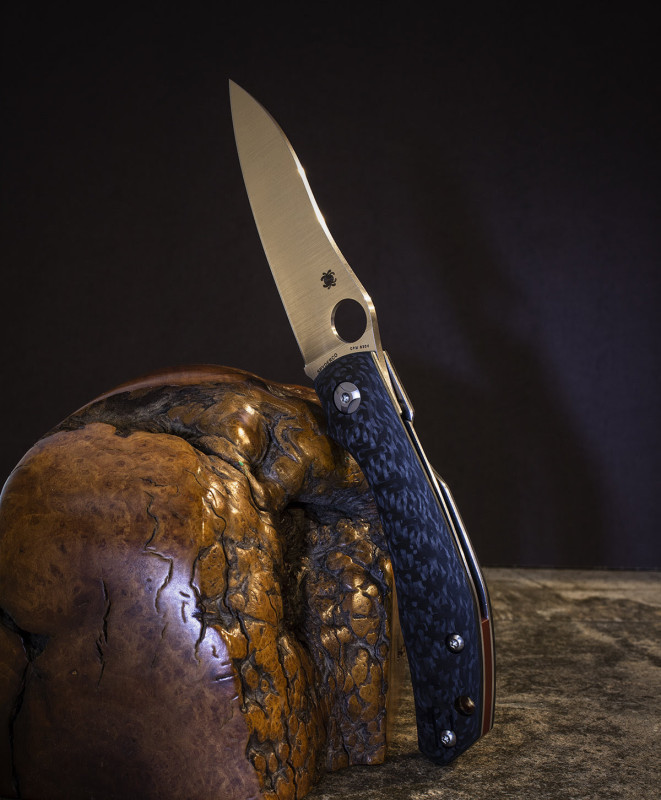 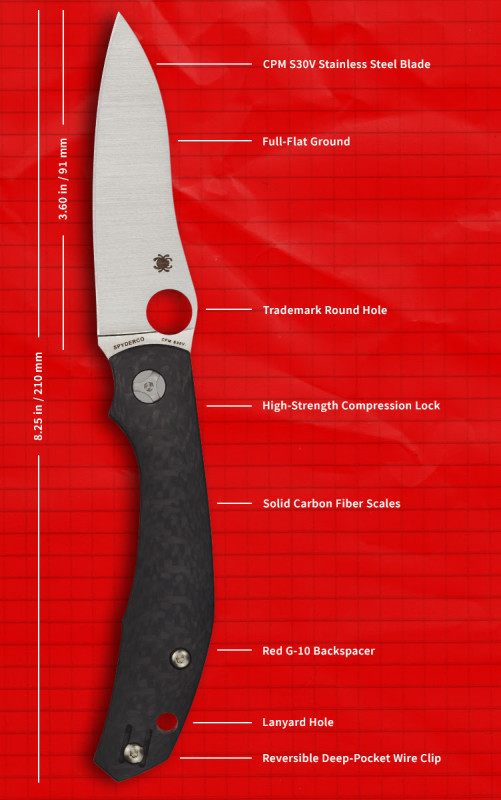 The heart of the Kapara’s design is its CPM® S30V® stainless steel blade, which is full-flat ground for truly impressive low-friction edge geometry. Its fully accessible Trademark Round Hole™ allows convenient one-handed opening with either hand and its drop-point profile gives it both a long, gently curved edge and an acute, utilitarian point.
The handle of the Kapara features full, skeletonized stainless steel liners that form the foundation of its high-strength Compression Lock™ mechanism. The liners are capped by stunning solid carbon fiber scales that are meticulously 3-D machined to give them a subtle radius. This detail complements the sophisticated styling of the handle profile to offer an exceptionally secure and comfortable grip. An index-finger choil at the base of the blade allows a forward grip for enhanced control and helps draw attention to machined details on both sides of the blade’s pivot. Symbolic of the knife’s name, the Kapara proudly features a red G-10 backspacer that provides a visual accent and added structural strength, while leaving most of the handle’s back open to reduce weight and simplify cleaning. 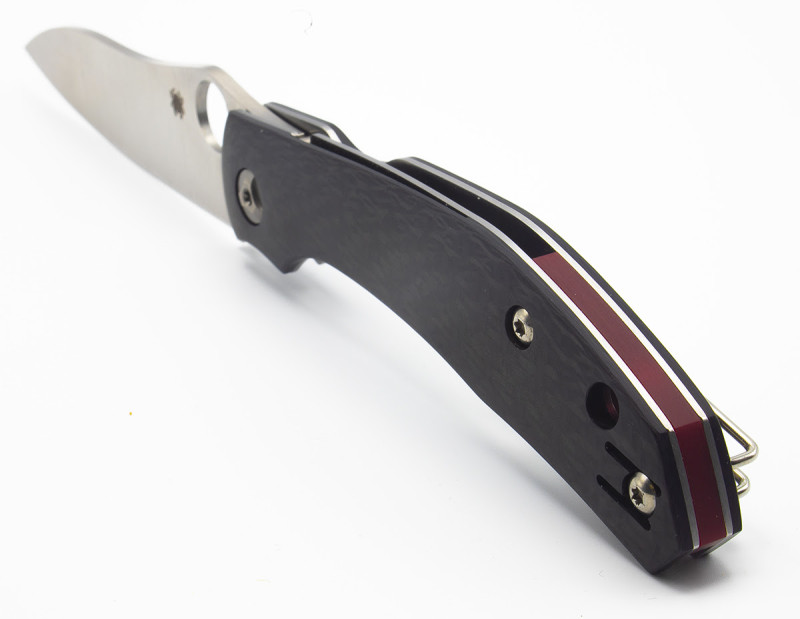 For ease and convenience of carry, the Kapara includes a reversible deep-pocket wire clip that can be configured for left or right-side, tip-up carry. A generously sized lanyard hole also allows the easy attachment of fobs or lanyards.
The Spyderco Kapara is an exquisitely executed folder that faithfully represents the character and meticulous craftsmanship of Alistair Phillips’ coveted custom knives. An impressive synthesis of style and utilitarian function, we hope you will be as excited about it as we are. 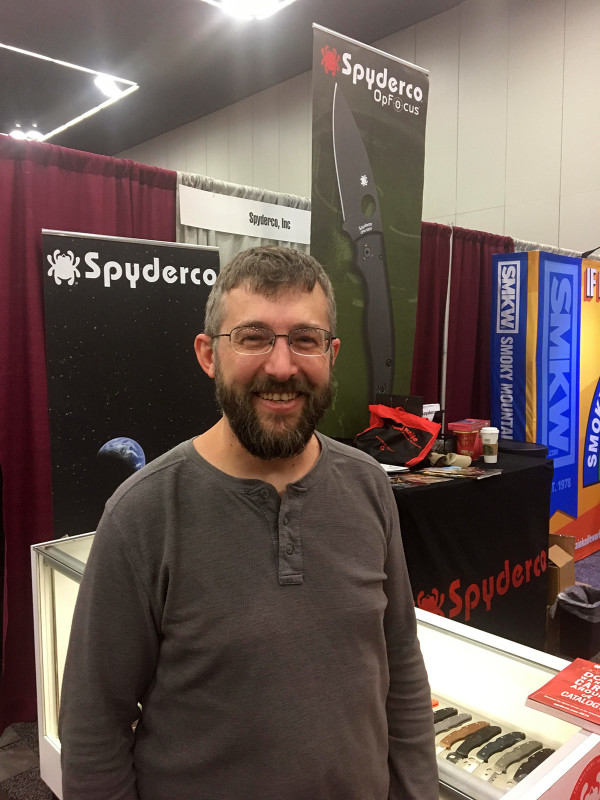 Born in Sydney, Australia, Alistair Phillips saw a lot of the world at a very early age. His father served in the Australian Navy, so he and his family had the opportunity to live in the United Kingdom, the U.S., and Adelaide, in South Australia.
As a youth, Phillips got involved in scouting and quickly learned the many advantages of carrying a pocketknife. Years later, after learning that his local butcher also made custom knives, he decided to give knifemaking a try. Interestingly, the first knife Phillips started in the butcher’s workshop remained unfinished for more than a decade while he was attending university and starting his full-time career as a computer game developer.
In 2004, Phillips attended a knifemaking course taught by Karim Haddad at the Tharwa Valley Forge in Canberra, Australia. There he completed his first handmade knife and developed the skills and confidence to go back and finish the blade he’d started many years before. From that point on, he was hooked and continued to refine his skills with the benefit of Haddad’s friendship and mentorship.
Although he enjoyed making fixed blades, Phillips’ fascination with mechanical things and his early love of pocketknives soon inspired him to try his hand at making folders. He began with slipjoint knives because he believed they would be easier. As his skills improved, he began to tackle various types of lock mechanisms and soon specialized almost exclusively in finely crafted folding knives.
A self-described “spare-time knifemaker,” Phillips makes his living as a computer game developer and has been instrumental in the creation of games such as Fallout Tactics and World of Tanks. He also creates interactive exhibits for museums, the most recent of which was an exhibit at the Sir John Monash Centre in France commemorating Australia’s involvement in World War I. On Sundays or whenever he has extra time between projects, you’ll find him in his shop making knives.
Phillips’ favorite aspect of making knives is the fine-tuning process of getting a folder’s action just right. As far as his knifemaking influences, in addition to his original mentor, Karim Haddad, he credits Tony Bose for sharing his design patterns, Jens Anso for his inspiring designs, and Grant and Gavin Hawk, T.J. Schwartz, and Joe Caswell for their genius in creating new folding knife mechanisms.
A full member of the Australian Knifemakers Guild, one of Phillips’ proudest moments was winning the award for the Best Folding Knife at the 2012 Australian Guild show with a stag-handled three-bladed stockman folder.
Spyderco is extremely proud of our relationship with Alistair Phillips and very excited to offer his Kapara folder to our customers. For more information on Phillips and his custom knife designs, we encourage you to visit his web site http://www.alistairphillipsfolders.com.
Tags: alistair phillips, knife, knifemaker, spyderco, новинки, ножи
Subscribe