Продолжаем знакомство с Great Persons in the World of Knives.

As you know Francesco Pachi and me introduce our new project about Great Persons in the World of Knives.
The name of Francesco Pachi is well known for knife masters and not only for them.
A talented man is talented in any craft, so Francesco is known not only with his knife masterpieces highly appreciated by collectors: for a long time he was the head of, probably, one of the most famous knife Guilds in the world, the Italian Knife Guild.
Besides, he makes amazing photographs appreciated by collectors not less than his knives.
Currently he his occupied with photography only. But still the knife world, be these real knives, photographs, exhibitions, books, or anything else, here are his world and his life.

One publication by me - one photo by Francesco - one famous knife maker. 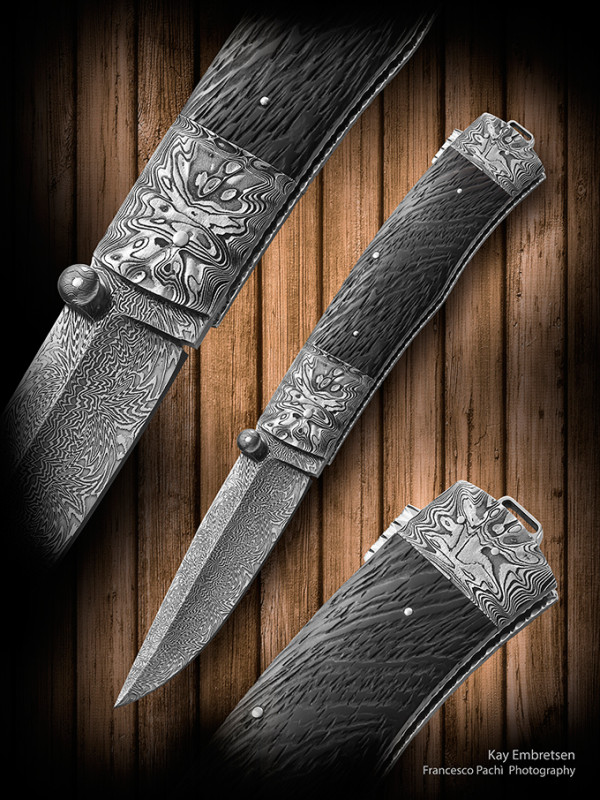 I have been a full time knife maker since 1983.
I make folders, daggers, fighters and hunting knives. I make my own damascus steel.
Family
I am married to Monica, and we have two children, Sandra and Per, and four grand children.
Monica is working as a personel manager, but have a great hobby in the Havanese dog, here is her web site about the dogs:
www.tequilavilles.com
Shows
I attended my first show in the USA in 1988 and I attend several of the big shows
every year. When I´m in America, I usually visits the following shows:
The East Coast Custom Knife Show, New York
The Solvang Custom Knife Show in Solvang California
The Art Knife Invitational Show in San Diego
I also attends the Italian Guild show in Milan and the Helsinki Knife Show in Finland.
My awards
During my years as a knifemaker I am grateful for having recieved some awards:
Beretta award for outstanding achievements at NYCKS 1988.
Judges award at ECCKS in l993.
Best folder (award from Barrett-Smythe LTD) at the Guild show 1994.
The "Knife of the Year" award at Elverum, Norway l995.
Best Damascus Folder at ECCKS 1995
Best Knife Collaboration at ECCKS 1995
Best Damascus Design at Blade Show 1996
1:st Price at Elverum Norway 1996
Best Damascus Folder at SICAC Paris 1997
Best Damascus Folder at Esposizione Internationale del Coltello in Milan 1997
Best Knife of the show at Solvang Custom Knife Show 2001
The first chair in the Swedish Knife Association' s "Hall of fame" 2010
Articles
I have had several articles presenting my work, and I´ve listed some examples below:
La Passion des Coteaux no 4 1990
Passion for Knives no3 1991
Knives Illustrated oct 1995
Blade Magazine jan 1997
Deutsche Jagd Zeitung no 7 1995
Waffen Magazine no 6 1991
The Sony Catalouge Japan automne 1996
Japanese Knife feb 1995
ASE-lehti no 2 1994
Deusches Waffen- Journal no 12 1998
My work has also been displayed in some magazines and some TV-programs
here in my home country Sweden. When it comes to my photos, I have had some
of them published in the annual knife book of knives by Ken Warner. I have also
had some of my work published in Jim Weyer's Point of Interest IV.
Ordering
I take orders, and my delivery time varies between 6 -9 months, sometimes
up to a year. I can be reached by phone, or e-mail if there is some interest
or if there are any questions. All the information which you need to order can be found
at the top of this page.
Kaj Embretsen
Francesco Pachi http://www.pachi-photo.com/index.asp